The Battle of Moira is the earliest documented record of life here.

The battle was between Domhnall (pronounced Donall), High King of Ireland and Congal Cláen, King of Ulster. It is described as one of the most blood-thirsty in early Irish History.

Congal fled to exile in Scotland and asked for help. He returned with an army of Britons, Scots and Saxons, including a Scottish King and a number of Princes. He probably arrived through Dunseverick. One of the five royal roads from Tara, seat of the Kings of Ireland, ran due north and ended at Dunseverick castle.This ancient road was known as the High King’s Road and crossed the Lagan at a fort near Moira – probably over the ford where Spencer’s Bridge now stands.

Congal and his troops marched south. Domhnall advanced from Tara, with an army of Irish chieftains and princes. The two armies of 50,000 men on either side, came together at Moira. Congal’s army was annihilated (that means totally defeated). Congal himself was killed.

One historian said it was “the greatest battle, whether we regard the numbers engaged, the duration of the combat, or the stake at issue, ever fought within the bounds of Ireland.” (Congal: in five books by Sir Samuel Ferguson)

The defeated armies fled in the direction of the Killultagh Woods, near Ballinderry.

When the Railway was being built, great quantities of bones were discovered. These are believed to have been from the men and horses killed in the battle. Just below the kilns there once was a mound which a few years ago was “discovered to consist almost entirely of human remains; evidently of those who had been slain in some great battle”. (Quoted by Eileen Cousins in “Like and Evening gone” – a history of Magheralin Church). 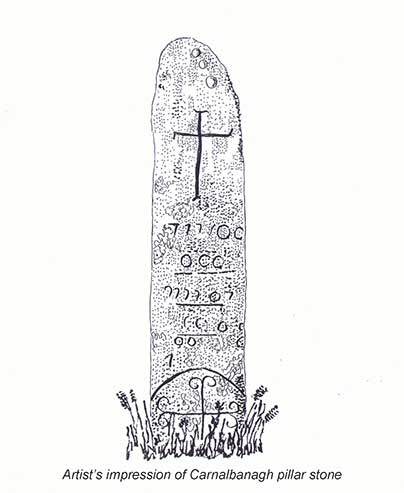 A drawing representing the stone in Carnalbanagh. © Gordon McFarland www.wgafinelineart.co.uk

Some of the names of the townlands in the area originate from the Battle. Aughnafosker means the ‘field of slaughter.’ Carnalbanagh means ‘the Scotsman’s grave.’ Kilwarlin means ‘ wood of slaughter.’

There was once a pillar stone in Carnalbanagh with crude crosses and circles on it, marking the graves of the Scottish Princes. It stood for well over 1000 years but one day a farmer knocked it down and used it to fill a hole!. The farmer who removed the stone was named Green. 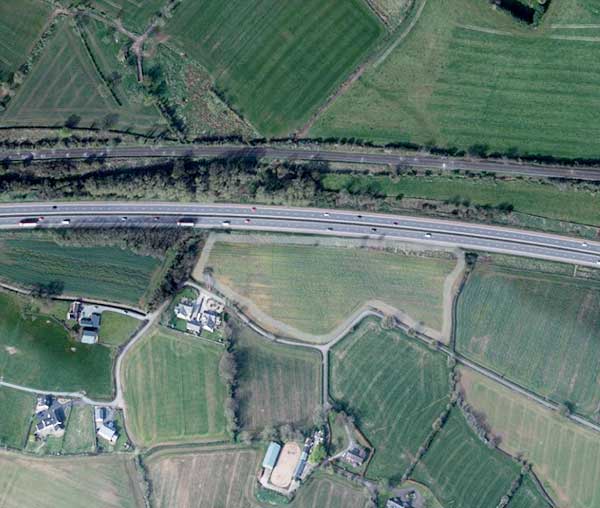 A Bishop called Saint Ronan Finn came with Domhall’s army in 637 and is said to have established a church and monastery or nunnery in the area. Many years ago it was said the ancient church was in a field belonging to Charles Byrne, in the townland of Kilminiogue. Cultivation of that field unearthed such quantities of bones that indicated the presence of an ancient graveyard. Nearby was a very old well called Tubber.

Today there are no traces of this church or the well. They are believed to have been on land between the westernmost end of Backwood Road and the motorway. (outlined below)