Legend says St Patrick came up the Lagan but of course there are so many legends surrounding the man. There is no way of knowing if he did come to Moira, though some believe he founded a church in nearby Glenavy.

We have already learned about thousands of visitors to Moira in 637 AD when the famous battle was fought. Domhnall the High King went back home to Tara as a victor.

But four centuries later Moira had another “royal” visit. Murtagh McNeill wrote a poem called “The Circuit of Ireland”. He traced the progress of the King of Aileck through Ulster in the 10th century and listed the places where he stayed the night and the list includes Moira. So a King slept here in our village 1,000 years ago! (Craigavon Historical Soc. Vol 2 no1)

The Moira area was visited by a number of well known preachers. George Whitfield preached in Lisburn, the Maze and Lurgan in July 1751 but we don’t know if he stopped on his journey to preach in Moira.

In July 1756 John Wesley paid his first of many visits to Ulster and during this visit he came to Moira. Anne Lutton wrote “One day in the year 1756, the Earl of Moira sent a servant to the clergyman to request the key of the Church, so that the Rev. John Wesley might preach to the people. The clergyman declined in giving the key. … The Earl was greatly annoyed at the Rector’s refusal, but determined that nothing should prevent Mr. Wesley from preaching; so he sent the bellman through the town, to summon all the people to the lawn before the Castle, and Mr. Wesley stood on the top of a long flight of steps before the grand entrance hall and preached to the people”. (Memorials of a Consecrated life” by Anne Lutton. Pub. 1882) 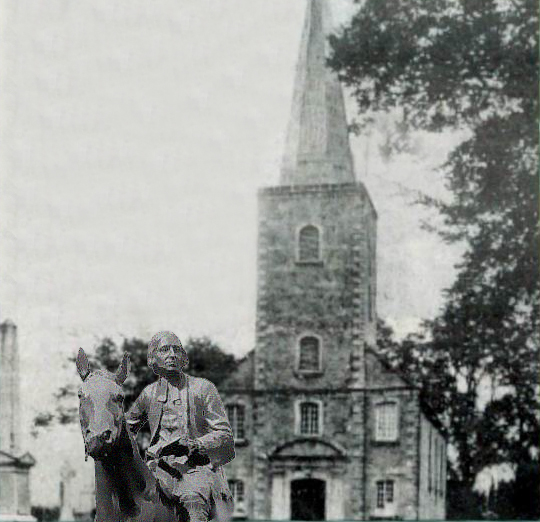 In 1760 Moira was visited again by Wesley. He was apparently a guest of the family at Moira House and describes the occasion in his journal:

“I rode to Moira. Soon after twelve, standing on a tombstone near the Church, I called a considerable number of people to ‘know God and Jesus Christ whom He had sent’. We were just opposite to the Earl of Moira’s house, the best furnished of any I have seen in Ireland. It stands on a hill with a large avenue in front, bounded by the Church on the opposite hill. The other three sides are covered with orchards, gardens and woods, in which are walks of various kinds”.

In Journal No.XII, Wesley writes of a third visit just over a week later on Monday, May 12th, 1760; “I preached to a very civil congregation but there is no life in them”.

Wesley was in the area on several occasions during the following years but there is no record of ever again preaching in Moira. He passed this way on 26th June 1762 and 14th June 1773 en-route between Lisburn and Lurgan. On 6th July 1771 he “spent two hours very agreeably in Mayra” on his journey between Ballinderry and Newry. He remained a very good friend of Lord Moira and his wife Elizabeth and often visited in their home in Dublin.