Moira Presbyterian church is about to officially open their wonderful new church building. This might be an appropriate occasion to share some brief comments on Presbyterian history from the forthcoming book on the History of Moira. I would appreciate if anyone knows of errors in these comments or can share any additional information.Thank you. 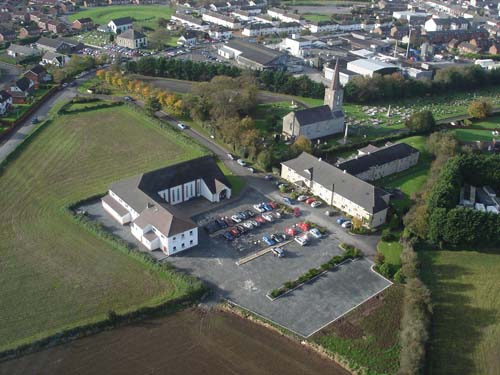 Quite possibly only after George Rawdon’s death in 1684 was it feasible for dissenters to worship publicly in the village. Rawdon was required to prevent Scots ministers from preaching; his instruction, in a letter dated 16th December 1649, was “That you suffer no Scots ministers to preach in the country again.”[1] George Rawdon took this responsibility very seriously and boasted that his Scots neighbours “esteem me one of the horns against the kirk.”[2] He was most active in the Lisburn area but even went as far as Ballymena to oppose Presbyterians and vigorously enforced the Five Mile Act.[3] The Presbyterians of Lisburn did not apply for a permanent minister until after the death of Rawdon, indicating how much they feared him. It would appear that George Rawdon’s ancestors were less antagonistic toward other religious groups.

An early Presbyterian minister appears to have had non-subscribing sympathies and in 1727 he joined the Presbytery of Antrim. In 1731 the congregation asked the General Synod for help to build a new church as they had been deprived of their meeting-house. A new meeting-house was erected in 1738[4] but three years later the church was described as a poor and indebted congregation and for years the church had no minister. Seceders became prominent in the locality and attracted the majority of the Moira congregation.

By the middle of the century the Seceders had apparently taken over that new building, installing a minister of their own persuasion. Those loyal to the Synod of Ulster section complained about the seizure and stated that they had been at considerable expense in a lawsuit for its recovery. Two congregations with different loyalties existed side by side for many years. It is possible the two groups met in the one building but by 1760 “the seceders still had the house.” A Deed of partition on 27th May, 1790 shows “the dissenting and seceding Presbyterian congregations of the parish of Moira, Co. Down agree to divide equally between them the meeting house and acre of ground on which it stands in the townland of Clare.” The dissenting parties to the deed were led by the Rev. David Trotter of Moira and the seceding parties by the Rev. Adam Gilbert of Ballymagaraghan, parish of Moira.[5]

It is thought by Presbyterians of the Synod of Ulster that a building was erected on their present site around 1770. That building was replaced by a building in 1829 costing £550. The date of the building is not surprising since that coincides with the split in the Presbyterian Church between the subscribers and non-subscribers. The date is confirmed by Historic Building records which describe it as “a free-standing two-storey Presbyterian Church, dating from the early-nineteenth century with later alterations. The church has little architectural or historic interest.”[6] As I write[7], that Presbyterian building has just been demolished and the church has erected an impressive new building.

Although George Rawdon was long since gone, for years there were on-going tensions between the Anglicans and Presbyterians in Moira, particularly at the time of the Rebellion of 1798. In fact the father-in-law of one of the ministers was Rev, James Porter of Greyabbey. He was hanged in front of his Meeting House because of his part in the ninety-eight rebellion.[8]

“may reflect common disparities as in West Ulster between Ulster Presbyterian and Anglican emigration but also reflects the official and unofficial repression in a Parish whose Presbyterian inhabitants were notoriously rebellious in 1798.”

Miller suggests the reason for the decrease:

“Barring wholesale conversion to the established church, surely only drastic pressure such as post-rebellion changes in landlord’s leasing policies …. and favouritism to “loyal” Anglican migrants from other parishes, can account for such dramatic revisions of Moira’s ethno religious composition.”

Professor John Barkley in his Short History of the Presbyterian Church in Ireland tells us,

“After the government had succeeded in quelling the rebellion, the people, especially in Antrim, Down, Wexford, and Wicklow were treated with great brutality and cruelty. Many innocent people were put to death without trial, homesteads were burned, and property was destroyed. Hundreds fled to America.”[10]

Thank God we live in a different atmosphere in our village today.

[2] The Anglo-Irish Experience, 1680-1730: Religion, Identity and Patriotism by David Hayton. Publ. 2012 The Boydell Press.Top of FormBottom of Form

[3] The Five Mile Act 1665, was an Act of the Parliament that sought to enforce conformity to the established Church and to expel any who did not conform. Clergymen were forbidden from living within five miles of a parish from which they had been expelled, unless they swore an oath never to resist the king or attempt to alter the government of Church or State. They had to swear to obey the 1662 prayer book. Thousands of ministers were deprived under this act.

[9] Irish Immigrants in the Land of Canaan, letters and memoirs from colonial and revolutionary America, 1675–1815 Oxford University Press 2003