Home »Category»Schools»The residents of the castle 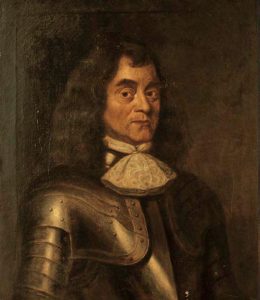 Major George Rawdon, (1604-1684) came to the area in 1631 to manage the Estate of Viscount Conway at Killultagh. He built the Garrison for soldiers at Aghalee. We call the place Soldierstown. The garrison was close to the site of Soldierstown church.

There was a Rebellion in 1641-2, when the armies of Sir Phelim O’Neill attacked Lisburn. George Rawdon, with an army of 200 Englishmen fought off the enemy. Twice he escaped death (in Lisburn 1641 and in Armagh 1642) when in each battle his horse was shot from under him.

Rawdon received large grants of land, particularly O’Lavery’s lands and property in Dublin, as a reward for saving Lisburn.

Rawdon was responsible for the early growth and development of Lisburn after the Rebellion. He also bought the Ballynahinch estate known as Montalto around 1660. He built a magnificent house which still stands today and over the next twenty years he rebuilt Ballynahinch from scratch, erected cornmills, and laid out the market square. But Moira was always a special place for the Rawdon family. 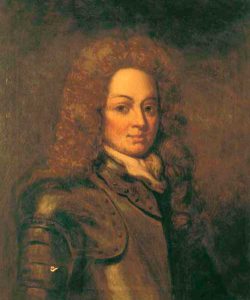 Arthur Rawdon, (1662-1695) was born and grew up here. Like his father, he was a Member of Parliament and became a General in King William of Orange’s Army. When King William landed in Ireland, Rawdon fought on his side. He was such an effective leader that he was given the nickname “Cock of the North.”

Rawdon was seriously wounded in the trenches in Portglenone, yet still led his men through tremendous battles and eventually was besieged in Derry. (1688-1689) There he became dangerously ill. He still played a very important role in the events of that siege but because of illness he had to escape and he returned to Moira. He gave up being a soldier and set about developing the Moira estate and became Sir Arthur.  Sadly Sir Arthur lived only a short time to enjoy the garden he created and loved, for he died in 1695 on his 33rd birthday.
 

Sir Arthur’s successor was Sir John (1690-1723). Throughout his short life he had much ill health, owing to tuberculosis. He was buried in the family vault underneath the newly consecrated Parish Church – perhaps the first burial there. 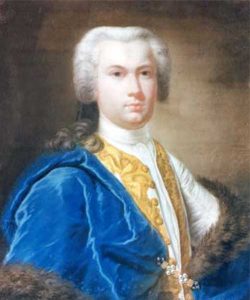 Sir John Rawdon, Earl of Moira. © Copyright This image is reproduced courtesy of the National Library of Ireland PA 1005B http://www.nli.ie

His son, also called John, (1720-1793) was born in the castle and inherited the estates at the age of three. He is the one credited with the development of the village, though if dates are correct; it is more likely his father was the prime developer. It is generally accepted the village was completed in 1735 at which point young John was only 15 years old. John was also knighted and later became Earl of Moira in 1762. This first Earl was a well known figure in Irish Government circles.

Eventually the Rawdon family moved their seat to Ballynahinch around 1770. But when Sir John died in Dublin in 1793, his funeral was the largest ever seen in Ireland and it took place in Moira. He was buried in the family vault in St. John’s. The funeral was attended by up to 800 carriages, with 4000 people, among whom 2000 hatbands and scarves were distributed.”

Around 1770 the castle was let to Colonel William Sharman, Irish M.P. for Lisburn. The Sharman family lived here for only a short time. A son was born here and became a very notable and radical politician called William Sharman-Crawford. 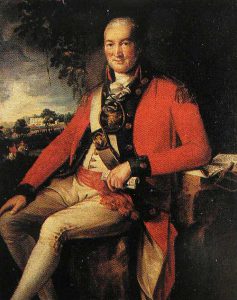 In 1800 the Demesne was purchased by the family of Sir Robert Bateson. Mr Bateson was MP for County Londonderry. He owned Belvoir Park in Belfast. He resided there; it is likely that Moira Castle was a ruin by this time. His son Thomas became Lord Deramore in 1885. The Bateson family built the new Market House in 1810 and their crest is prominent on the building.

Mr Mac says, “One hundred years from now, what will someone write about you and what you have done with your life?”