The Plantation of Ulster was a policy of the English Government in the late 16th and early 17th Century. After Hugh O’Neill and others fled from Ireland in 1607, King James granted all the lands in this area to several Irish freeholders, “hoping the same would be better manured and inhabited.” The territory of Moira was granted to Irish man Murtough O’Lavery. (The History of Ireland. John D’Alton 1845) Lisburn and much territory around here, including the captured Fort, were given to Sir Fulke Conway in 1609 and the Plantation of Ulster was under way in this area. 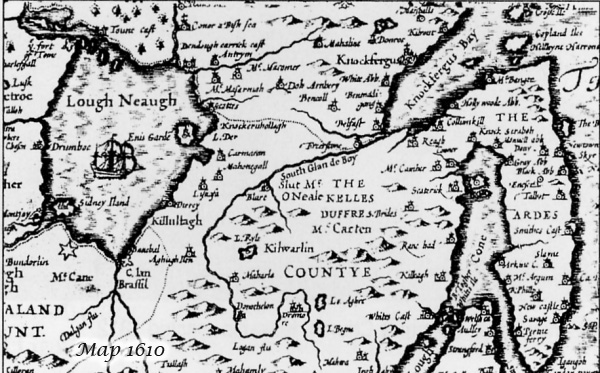 As the Plantation progressed, much Irish-owned land was confiscated and Ulster was planted with Protestant families from many parts of Scotland and England. Because O’Lavery supported the rebellion of 1641, much of his land was eventually in the hands of George Rawdon.

Between the years 1600 and 1641 a great change took place in the appearance of the area. The Lagan Valley at that time was very sparsely populated. The new settlers that Conway brought here had to clear the natural forest from the valley floor and surrounding hills. Over the years this area of bog land became fertile fields. The whole district was once known as “the Bogs” or “marshy Moira”. (Ulster Journal of Archaeology Published 1860)

The situation in the country slowly improved. This encouraged the noblemen such as Conway and Rawdon to spend money to improve their estates. And so Moira began to be a relatively more stable and settled community, with the prospect of better times ahead.