Extracts from a forthcoming History of Moira:

We are fortunate to have several word pictures of the Castle grounds. One writer in 1774 is described as writing “with luxurious fancy upon the vegetable wealth, the horticultural beauty, the botanical attractions and the tasteful and intricate disposition of the gardens and parks of Sir John Rawdon’s demesne.”

Gabriel Beranger visited here and described, “an ancient building on the estate of the Earl of Moira which the Earl got modernised and made a commodious habitation: it is surrounded by a wood, which affords beautiful shady walks; a large lawn extends in front, where sheep are feeding, which is terminated by trees and a small lough eastwards; the rear contains a wood with a large opening fronting the Castle, which forms a fine perspective.” 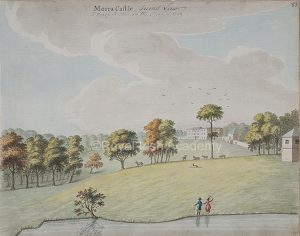 He continued, “On each side of this extensive lawn are shady walks through the wood, terminated to the east by a long oblong piece of water, surrounded by gravel walks where one may enjoy the sun in cold weather. And to the west lies the pleasure and three large kitchen gardens.”

Though this visit took place in 1799, when the Sharman family owned the property, it seems that much of what he saw must have been planted and designed by Arthur Rawdon. But even a century after the planting of the demesne was begun, the residents still had a pride in the place.

Beranger went on to describe a large abandoned quarry on the west of the demesne which:
“Miss Sharman got planted and improved and has called it the Pelew. It forms at present a delightful shrubbery with ups and downs, either by steps or slopes and has so many turns and windings, that it appears a labyrinth and contains shady walks and close recesses in which little rural buildings and seats are judiciously placed, with a little wooden bridge to pass a small rill of water. Jassamine, woodbine and many flowering shrubs adorn this charming place.”

It is possible that this is the abandoned quarry on Backwood Road and if so, would help us see the extent of the Demesne and woods. However, in the area of Oldfort there was once a quarry and one life long resident of Moira recalls playing there, despite parental warnings never to venture there; she recalls unusual flowers in abundance.

A topographical dictionary of Great Britain and Ireland published 1833 described the town as; “The family of Rawdon, Marquis of Hastings, derive the title of Earl from this place and their ancient and noble mansion is adjacent to this town.” But another book published in 1837 says the Moira demesne was still very extensive and well wooded, possessing many large and rare trees, with a noble avenue leading to the site of the castle, long since demolished. 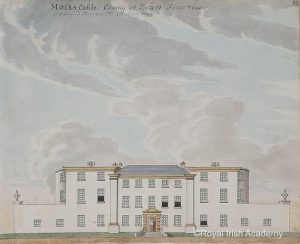 Some sources say the demolition was in the early nineteenth century and the Handbook for travellers in Ireland – 1854 says of the village, “near it are the remains of the demesne of the former Earls of Moira”. All this seems at odds with the Northern Ireland Heritage Gardens inventory and the Northern Ireland Planning Service, which dates the demolition as happening in 1870. Perhaps the latter refers to demolition of walls or ruins that had been still standing.

For many years it was possible to see the “long” and “round” ponds, the Dark Walk -a tree-lined avenue which was cut down apparently by the American Military during World War II – and a well-preserved ice-house. It is a shame so much has been lost.