Don’t you love trying to solve a mystery? Yesterday I was excited to see inside a home in Moira with almost 300 years of history. Thanks to Lynne from Ralph’s, I was able to visit the house that was the home of Ralph Lutton and his daughter Anne, known for her part in the founding of Methodism in Moira.

But I came away greatly puzzled. Lynne had shown me a copy of an etching that was entitled Home of the Luttons, Moira. It did not seem to be the home that for many years has been recognised as Anne Lutton’s birthplace. Was there a mistake somewhere? The house in the etching was too grand; too wide a frontage.

I decided to do more research and eventually found that same image illustrating a chapter of a book. The book is The Memorials of a Consecrated Life, compiled from the autobiography, letters and diaries of Anne Lutton of Moira County Down, Ireland, published 1882. 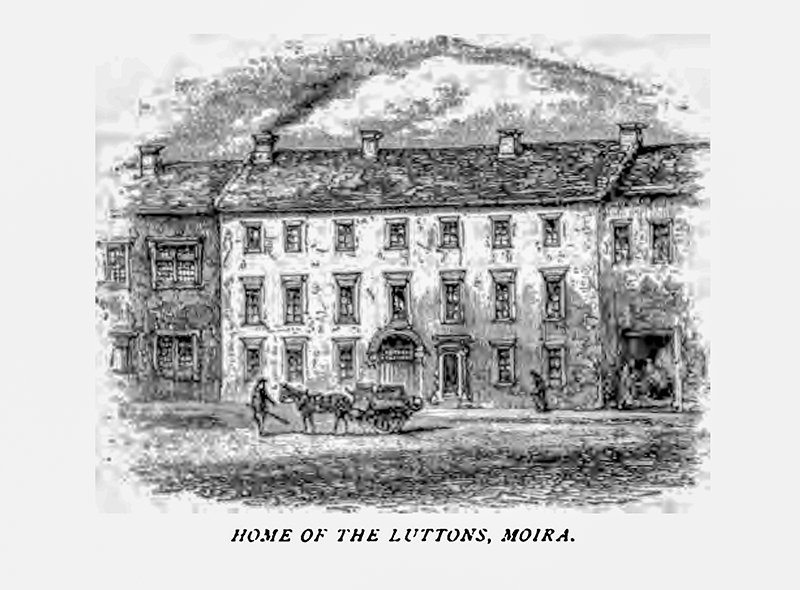 Image from a book “Memorials to a consecrated life: Publ.1882

Having decided that the published image must indeed be a reasonably accurate depiction of the Lutton home, I began to examine it more closely. I saw that what initially appeared to me to be a grand door was more likely to have been an archway to a rear courtyard. And to the right of it was a door to the home. The house had three stories, matching the house I had been in and three storey houses are rather unusual in the village. Was it the same house?

Then a lightbulb moment! If the door to the right of the entry had been moved and the windows widened, the right half of the home could be the present house, number 65. I remembered seeing the featured exposed brickwork around the inside of some windows, perhaps unlikely in the original building and the unusual supporting frame around a window in another room, all indicating the possibility of windows having been widened at some point in the past.

But if the drawing is indeed the Lutton home, what about the other half of the house? Then I saw it. The neighbouring property on the left of the entry is a more recent conversion of the original, still retaining the three floors but different windows. So I presumed that the building had been divided to create two homes. I was becoming convinced that the drawing did indeed represent the Lutton home on Main Street. What a grand home graced the street, perhaps the most prominent mansion within the village after the demolition of the castle.

I was so excited to have solved the mystery to my own satisfaction. But then I discovered more proof. As I read through the book mentioned above I came across this short paragraph.

“The ancestral home of the Lutton family retains the aspect of an antique mansion. It is of three storeys, with seven front windows in each upper row; but it is now divided into three tenements. It still has in the rear a large old-fashioned garden.”

So the home was not divided in two but in three! And a closer look at old postcard of Moira shows the home on the extreme left with one tenement beside the entry and its replacement windows and entrance. That property now is a fast food outlet. 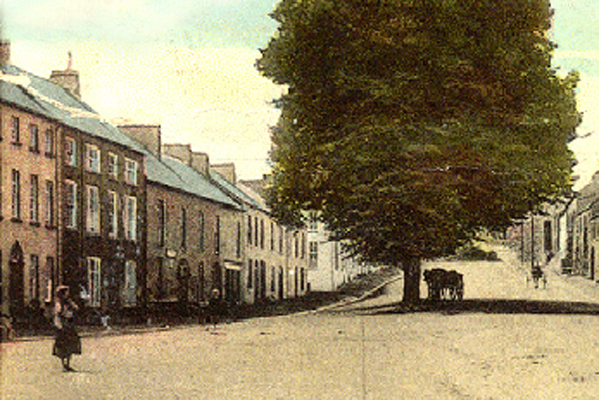 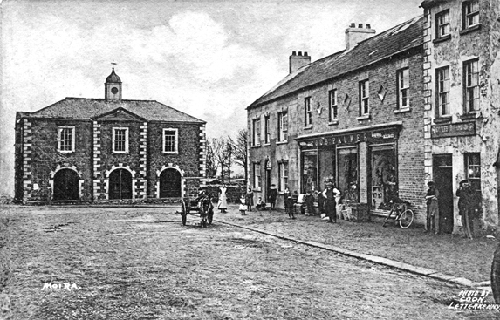 The other “tenement” would eventually become a blacksmith’s shop and feature in Coon’s early 20th century photograph of Moira. The blacksmith is seen standing in his doorway next to Job Palmer’s shop. Today that property is a butcher’s shop.

Moira village is teeming with history. I have been privileged to explore part of it and to share it with you. I confess that I am no expert in historic buildings, so if anyone can enlighten me further or correct my findings, I should be most grateful. 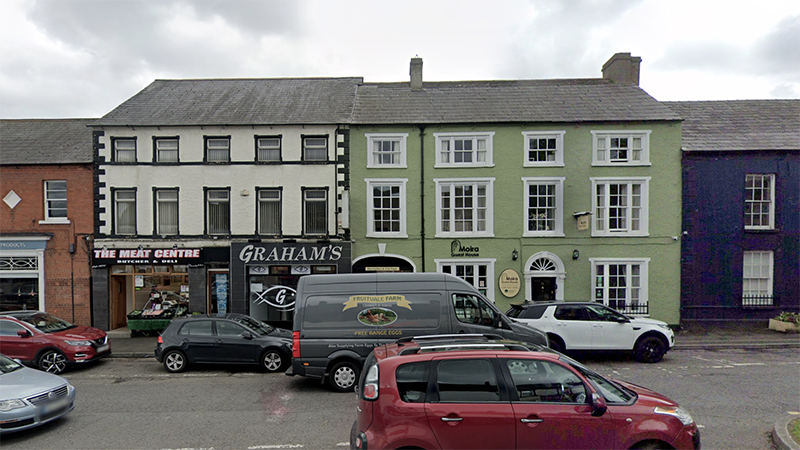