The north wind blew up Main Street in Moira. It was a cold Wednesday in March 1834. Trading was drawing to a close and most people were ready for home. Tethered horses whinnied softly as they waited impatiently to be free. A few children played hop-scotch in the shelter of the new Market house and a lad swung lazily on the rope that hung from a branch of one of the lime trees in the middle of the street. It was just like any other Wednesday in Moira until the stranger appeared. 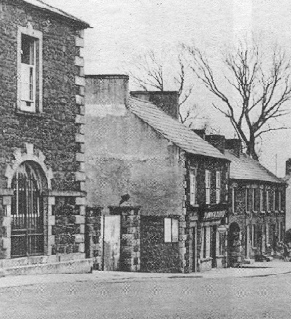 He was a venerable old man and he was carrying a chair on his shoulder. Who was he and where did he come from? Nobody knew but everybody was curious. He was dressed in sober clothing and had a long beard that reached to the middle button on his waistcoat. Was he a trader? He appeared to have nothing but a chair. He could hardly be a travelling musician for he carried no instrument. The old man came up the street and turned the corner of the Market House where the children were playing. Some stopped their game to stare and some ran home nervously to tell about the strange visitor. Men having a drink in the Inn came out to watch. Women peered out of their doors to see what their children were talking about.

The old man had achieved what he wanted – a curious group of onlookers. He planted his chair firmly and carefully climbed upon it, inviting everyone to gather round. Soon he had a group of inquisitive listeners and he began to speak. His strange accent showed he was not from this part of the world.

Across the street in the Inn, a man lay dozing on his bed from exhaustion. He travelled through Ireland on behalf of the Ordnance Survey authorities. Perhaps it was the sound of the old man’s voice that disturbed his slumber. He wakened with a start and went down to the door. He recorded what he saw.

“I started up, walked out, and being attracted by a semi circle of people standing at the sheltry side of Moira market house, I went down to them. Standing on chair, I saw a venerable old man repeating aloud one of the psalms of David. His long bushy beard, his Abrahamic countenance, and his thick pronunciation of consonants characterized him a Jew. I gazed on him with wonder, thinking I would have an opportunity of hearing him preach the Law of Moses, but I soon learned that he had abandoned the old cause of his tribe, and is now going about preaching the morality and doctrine of Jesus of Nazareth.
Yours truly,
John O’Donovan”

Nearly two hundred years later that same doctrine, that Jesus Christ is the Messiah come to save sinners, is still being preached in the streets and churches of Moira, including the one in this building.