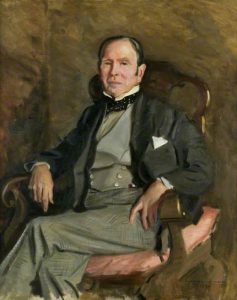 John Lavery was born in Belfast but he and his brother and sister became orphans when John was just three. He and his brother were adopted by his uncle Edward Lavery, a farmer from “Back of the wood” near Moira. It is almost certain this was where Clenaghan’s Restaurant is located. To quote from their web site: “Until recent times this establishment was known as ‘Winnies’ after Winnie Clenaghan. Her mother was Kate Clenaghan (nee Lavery). She was a first cousin of Sir John Lavery, one of our most distinguished Irish artists and he was reared on this farm as a young boy.”

John went to school, first at Soldierstown, and then at Magheralin but he hated arithmetic. He was very good at art.

One of his Aunt’s cousins liked John so much he offered either to adopt John or to pay for his education but it meant moving to live in Scotland.

The poor orphan boy rose to become one of the greatest artists of his time. He was Knighted in 1918 and later became a Freeman of Belfast and of Dublin.

Sir John was commissioned to paint the Royal Family, including Queen Victoria. One of his famous paintings is ‘State Visit of Her Majesty, Queen Victoria to the Glasgow International Exhibition, 1888’. He also designed the first paper currency of the Irish Free State.

Today his paintings are exhibited in art galleries all over the world.

Another child of Moira was Anne Lutton. She was born and grew up in a house on the Main Street of Moira, just below the four trees. There were nine sons and four daughters. Anne was the youngest of these.

Mr. and Mrs. Lutton were both unusually intelligent, though Mr Lutton was partially blind. Anne had little formal education. She hated school and went very little. She was passionately fond of reading, even at five years old, so she read every book she could get her hands on. She became a writer and poet.

She said all her study was “a training process for higher and more hallowed (that means holy) duties.” Anne became a preacher in a time when there were very few women preachers. Some men in the district used to try to get into her meetings to hear her but they were not allowed. Some dressed as women but were usually recognised and thrown out.

She was largely responsible for the beginning of a Methodist Church in Moira. 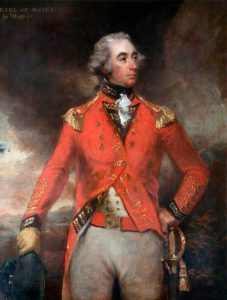 On one occasion when he was ten years old, playing war games in the demesne, a gun exploded and injured him in the leg. But the incident did not put him off a military career. He joined the army when he was 16 or 17.

He fought in the American War of Independence. He later became a General of the British Armed Forces in America and commanded the armies that brought victory to the colonists. He is said to have been one of the most courageous Generals in the whole war.

On his return, Francis became MP for Randalstown. He was to eventually inherit his mother’s titles as well as his father’s, and also much of the estates belonging to the Huntingdon dynasty. He was extravagantly wealthy but was so generous or foolish that eventually he lost most of it. Francis took on his mother’s maiden name and became famous as Francis Rawdon Hastings or the Earl of Hastings.

He was a very close friend of George IV who gave him an opportunity to be Prime Minister in London. Unfortunately he was unable to form a government and so as a consolation prize, he was sent to India in 1813 to act as Governor General of India. Rawdon was largely responsible for the establishing of India as part of the British Empire. He fought battles, built roads and bridges and dug of canals. He encouraged education among the Indians and founded a College.

He was later appointed the first Commander-in-Chief of Malta. 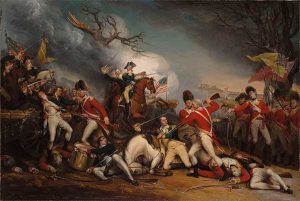 The Death of General Mercer at the Battle of Princeton, January 3, 1777 by John Trumbull
Public Domain image

Dennis was a native of Moira. It was his ancestors’ land that was confiscated because of their support of the 1641 rebellion. Dennis grew up in poor surroundings and with little hope. He joined the Army and was shipped off to America to fight in the War of Independence.

Denis O’Lavery served as a corporal under Francis Rawdon. In 1781 O’Lavery was wounded while carrying an important despatch. To avoid its falling into enemy hands he hid it in his wound.

“Within his wound the fatal paper placed,
Which proved his death, nor by that death disgraced.
A smile, benignant, on his countenance shone,
Pleased that his secret had remained unknown: So was he found.”

The message was saved but the result was fatal.

A letter of the time describes O’Lavery, “.. in rank a corporal, he was in mind a hero … his country Ireland and his parish Moira in which a chaste monument records at once his fame and the gratitude of his illustrious commander and countryman Lord Rawdon.” The location of the monument has never been established.

Ironically, it was Rawdon’s great grandfather and others who had been given the O’Lavery family’s lands nearly 150 years before